↓ Skip to Main Content
Home › About Us › Ernie Quigley Biography 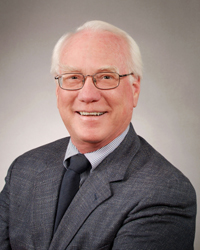 Ernie Quigley is the founder and president of Harmonic Timing. Educated in corporate finance at the University of Kansas, Ernie entered into the stock market in the late 1960s. He became a stockbroker for Hornblower & Weeks – Hemphill & Noyes, a New York Stock Exchange member firm in 1969. This association led him to study the “technical” side of analysis. He studied the works of George Lindsay, Edson Gould, Larry Williams, and the up and coming computer expert, William O’Neil.

In the mid-1970s Mr. Quigley left the brokerage business but continued his market studies. In the early 1980s he developed a keen interest in cycles and the works of the legendary W.D. Gann. His passion for knowledge led him to study for a number of years with Jerome Baumring, Ph.D., an internationally recognized authority on WD Gann.

“Jerry” required his students to follow in Gann’s footsteps by reading the works on Gann’s recommended reading list that were available. (These books, mainly from the late 1800’s and early 1900’s, are very rare and out of print. Jerry had almost a complete collection of the books on this list and shared them with his students.) Jerry required his students to hand chart data in the way W.D. Gann hand charted is data. Ernie has hand charted the price of soybeans from the date of the first trade on October 5, 1936 to October 13, 1989.

In February of 1994 Mr. Quigley purchased the first book of Bradley F. Cowan’s series of books. Mr. Cowan has greatly influenced the analysis work of Mr. Quigley. Ernie considers Mr. Cowan to be THE foremost expert in the use of Gann’s natural cycles in forecasting various markets.

Ernie Quigley guides the research Harmonic Timing and is the writer of its publications.

Ernie Quigley uses Gann's Cycles, price projections and technical tools to pinpoint probable turning points so you can buy the lows and sell the highs. Receive FREE Forecasting Videos & Articles that show how it is done! Simply type your first name and email address below and click "Sign Me Up!" We promise to never sell or distribute your e-mail address to anyone. Privacy Policy